Melamine Adulteration in Milk: What if AI detects it in 30 seconds?

Milk fraud is one of the most serious frauds that is happening in the industry, impacting the health of the consumers, making them loose their trust in the product & ultimately leading to huge financial losses for the dairy businesses. But as times have passed and technology has advanced new inventions, tech solutions have made their debut in the market to revamp the image of milk and have added a halo of purity around it.

Milk is supposed to contain protein and is considered a valuable component of milk. But the protein occurring naturally is not a constant. So a chemical as an addition in the form of Melamine- a nitrogen-rich compound is being increasingly added into milk to falsely enhance the protein count of milk and dairy products. If Melamine is swallowed, absorbed, or inhaled through the skin, it causes considerable harm. The permissible limits of melamine proposed by Food Safety and Standards Authority of India (FSSAI) in milk are-

• 1mg of melamine in every kg of powdered in infant formula

Why is melamine added in Milk? 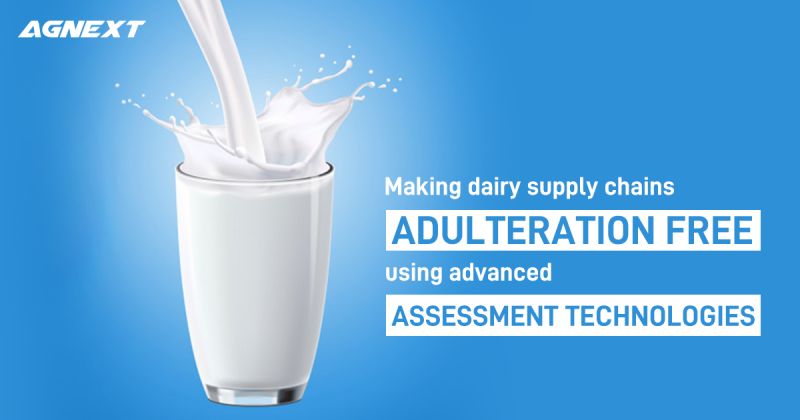 There are reports from China as well where more than 50000 infants had to be hospitalized and 6 deaths were also reported from China on account of the presence of high levels of melamine adulteration in the food consumed by them. Melamine adulteration of China was termed as the largest food safety event that WHO had to deal in recent years.

The existing testing solutions that are available in the market today fail to assess all the important quality parameters, composition & adulteration in milk & milk products. They lag behind as it is a time-consuming process, a costly setup, lack accuracy & find it difficult to upgrade the system process in case a new adulterant comes to light.

AgNext’s Qualix is one such innovation which claims to be India’s first breakthrough technology having the ability to instantly detect constituent and contamination of dairy products & provides end-to-end traceability of the same.

Qualix, an AI-based revolutionary solution measures composition and contamination in milk. It is a Bluetooth-enabled battery-operated portable solution that works in coherence with a mobile application for rapid assessment of quality. The sampler used in Qualix has a long shelf life, is unbreakable, and performs the test with enhanced accuracy.

It also has the ability to map the whole geographical area along with major adulterations used by the milk producers and has the potential to change the dynamics of the milk industry on account of its customizability and ease of reach through mobile. In the case of a new adulterant, our solution can be upgraded remotely in all sites within 3-5 days.

Milk industries can now feel assured that the milk that they are procuring is indeed devoid of contaminated content and the suppliers can also have a peaceful sleep that adulteration during the supply chain can instantly be detected through Qualix thereby preventing reputation loss for them.